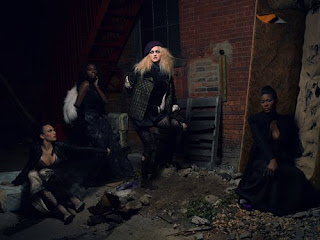 "To be completely honest, like the whole fashion thing... I'm not... It doesn't interest me at all."

Stupid! Stupid, stupid, stupid Kimberly. She was lucky to walk out of there alive because we all know how much Tyra Banks hates quitters. Seriously Kimberly - why on earth did you audition for the show if you don't want to be a model? There are chicks crying over the fact that they didn't make it to the show and you took a spot from one of them. It didn't even make good TV! I mean, the least you could have done was make a spectacle of yourself - or give Tyra a reason to make a spectacle of herself. But we got NOTHING! Oh well, I’m sure you’re wondering why I chose that quote if it fills me with such angst (or maybe not, maybe you don’t care). I don’t know why I chose it. I guess it was just the obvious thing to do. Anyhoo…

Otherwise this week was full of seeing the new ANTM digs, doing a run way gig in freezing cold and going to a homeless shoot.

(Aside: ANTM/Tyra likes to have a cause. Last season it was anti-smoking and I’m thinking this season it will be awareness. Awareness of the plight of the less fortunate (as seen in the homeless shoot) or maybe just awareness in general. That way Tyra could cover a lot of bases at once. Seeing as she is a model/talk show host/creator of ANTM it would probably behoove her to use a blanket strategy when choosing her “cause of the season” so that isn’t spread too thin. Although, being “too thin” is probably something Tyra wouldn’t object too… Hmmm…)

We didn’t really get a chance to see much more personality traits from the models - there’s only so much you can show in one hour! However, I’m thinking that as the season rolls on I will still dislike Marvita – she’s “broke-down” to quote Ms. Jay. And, despite the fact that she has been horribly mutilated in the genital area – I’m going to be brave and say I don’t like Fatima either. She is full of attitude and that’s not pretty. I love Whitney – plus size girls generally don’t stand a chance on this show, but I’ll suspend my disbelief for Whitney. Finally, that chick Anya is a loon and l dearly love crazy people. She seems to be doing well too! Yay Crazy Girl! I don’t have much of an opinion on the others yet but I’m sure I’ll be quick to label them and deride them for their lack of modeling skills in upcoming posts! Something to look forward too! Yay!

Posted by calicobebop at 9:53 PM

OMG Right! I wanted to slap that Biotch in her stupid little Barbie face! WTF and you are absolutely right, no quality TV, I mean the least she could have done was cause a scene so that Jesus I mean Tyra could have brought her down with a swift and stern "look"... smile with your eyes.... like this, and like this... like this... and like this! Love it!