Previously, I mentioned how happy I was to be seeing my Lost boyfriend Sawyer (*insert swoon*) after an eight month hiatus. Today I get to see my other real-live-crush, Jeff Probst, when Survivor: Fans v/s Favorites begins tonight! 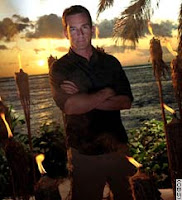 Jeff is the host of my all time favorite reality show, arguably the very first reality show, Survivor. From the very beginning, way back in 2000, I've been a huge fan. ("Can you please pass the rat?") I've followed every season - even when I was overseas! Thankfully my fellow Survivor friend, Debentropy, was able to keep me up-to-date on all of the back-stabbing, flip-flopping and off-voting because otherwise I would have surely perished over there. Now, I'm not going to claim that every season was solid TV gold because that's just not true. But, there have been more good seasons than bad and for my money - Survivor is the best test of human nature out there.

Tonight we're coming up on another experimental season, Fans v/s Favorites and I have high hopes for great TV drama. The last time Mr. Burnett decided to deviate from the "16 strangers on an island" path we had Survivor: All-Stars. I think most people will agree that All Stars was kind of a flop. At the time, I was excited to hear that one of my favorite contestants, Rob C. from Survivor: Amazon, was coming back to give it another try. However, it soon became apparent that our favorite devious players wouldn’t stand a chance. The problem with having previously played the game is that EVERYONE on the island (and in their living room) knows your strategy. Poor Rob was toast before he even knew what hit him.

(Aside – another reason I didn’t like that season was the whole Boston Rob and Amber love thing. I thought it was just silly and contrived. But hey – I’m a cynic.)

This season, Mr. Burnett has decided to pit a few of the favorite past Survivor players against some of the show’s most rabid fans. I’ve already posted my prediction on how this will play out on a couple of forums but here it is in a nutshell: I believe that the Fans will vote off the Favorites as soon as they possibly can. The reason? The Favorites have home court advantage! They’ve played the game, and they have also shown their proverbial hand. If they have truly followed the show, then the Fans will already know the style and strategy to expect from these Survivor Favorites. In my opinion, that puts the Favorites at a disadvantage.

Still, this is Survivor and as we have seen many (many, many, MANY!) times in the past – players don’t always do the smart thing. Sometimes players will vote with their heart (who cares which person deserves to win?) Sometimes players will make un-wise alliances (do you really think that Dreamz will hold up his side of the bargain, Yau Man?) Let’s face it; the unpredictability of this game is what makes it so entertaining. As usual, I’m looking forward to seeing it all play out. And this time I have my DVR to let me savor every episode over and over! *sigh*

Yay for Thursdays! Me, Jeff and Sawyer - the perfect combination. Now, where’s that bottle of chardonnay…
Posted by calicobebop at 10:20 AM