My little Muffin is in pre-school and she absolutely loves it. She loves her friends, she really loves the RED TRICYCLE and she especially loves "Show and Tell." Because she's all about the showing and the telling.

aside – (What a little talker - she will completely make shit up just to be talking. What's even cuter are the little hand gestures that go along with her fascinating explanations. I'm sure I'm not the only Mommie in love with this.)

So anyway… "Show and Tell" is on Fridays and last week her little friend brought in a Webkin. Perhaps I've been living in a cave for the past couple of years, but I honestly had no idea what a Webkin was and to be honest - I'm still not really sure. I think it may be a stuffed animal that has some connection with the internet - hence the name "Webkin." but I haven't bothered to do any research because the chances of my four year old having a toy that has anything to do with the internet at this point are slim to nill. (The Internet is MINE - ALL MINE!!) 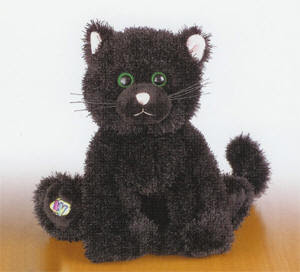 Well, Muffin is a joiner. She wants to pretend to have a Webkin like her little buddy. This Thursday, after school, she was avidly discussing her choices for "Show and Tell" and decided to bring a little bear that my sister had given her. (This bear is really kind of neat - Sissy had a boyfriend that made it for her out of an antique mink stole.

We had a little conversation that basically involved her trying to convince me that the bear was a Webkin and me trying to tell her that it was not actually a Webkin. I told her that it was ok to pretend that it was a Webkin but she had to realize that it wasn't really a Webkin and that her identity should not be defined by who had Webkins and who didn’t and by the way – it’s ok to be different. I think I only succeeded in confusing us both. In the end she decided that the bear's name was Sophie and if he wanted to be a Webkin, then he could be. 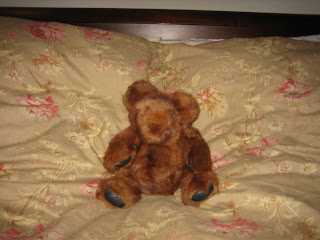 Meet Sophie. Decidedly NOT a Webkin. At all.
Ever.

Of course, all of her dolls and stuffed animals are named Sophie so that was no surprise… I was just concerned that she would try and pass off this obviously-not-a-Webkin stuffed animal as a Webkin and that her friends would laugh at her. Naturally, these types of concerns have not even occurred to her yet but they are still plenty fresh in my mind. I'd like to save her from that spirit-crushing experience of "you don't own a brand name" that is inflicted by nasty little kids. Is that so wrong?

You’ll be grateful to hear (read?) that she ultimately decided to choose Doodle the Cat for her “Show and Tell” item today. This stuffed kitty is the only animal in her menagerie that has it’s own name (not Sophie!) Go Doodle!! I’m not sure why it’s so special – but I’ll go ahead and file for a grant to research it. Who knows, it could be groundbreaking.
Well, suffice it to say - after this blog, I'm never going to type "Webkin" again. Damn that word was prolific - wasn't it? Have fun out there!
Posted by calicobebop at 2:00 PM