Have you watched the Tudors? You know, the program on Showtime that chronicals the life of King Henry VIII of England? Yeah, that's the one. Lest you think that it is some boring historical documentary - please take a look at the promo poster: 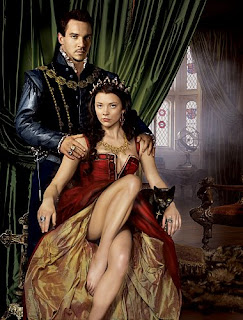 Hmmm, doesn't look boring to me! I heard about this program from a friend of mine who is blessed with premium channels. I don't have premium channels - but I do have Netflix! God Bless Netflix. I received the first season back in September and mowed through it in a few days. The story is well told, the actors are incredible - and well known, the sets and costumes are to die for. Plus, there's this guy, Jonathan Rhys Meyers, playing King Henry: 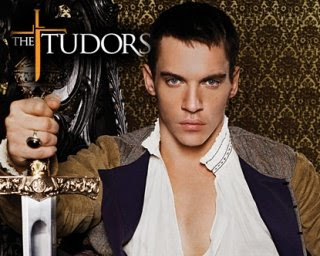 Meow. He perfectly portrays a young man who is determined to have his way in the world of politics and religion. He also has a really cute best friend, the Duke of Suffok, played by Henry Cavill: 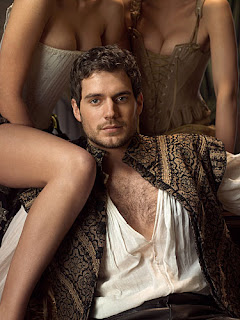 And he's the one that I would likely fall for. Kind of a bad boy with a good heart, know what I mean. *swoon*

Let me not neglect the few male readers of this blog - there are some foxy chicks on this show as well. Not only are they foxy, they are completely comfortable showing their "wares," if you know what I mean. Ann Boleyn, the main squeeze for King Henry (at least for now), is played by Natalie Dormer: 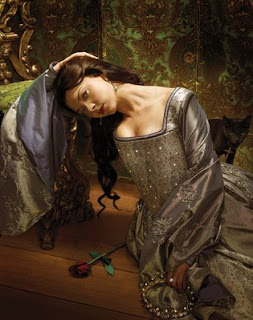 She's what I would call a Minx. Yes, she is the definition of minx. She is ruthless in her seduction of the King and one has to admire all of the techniques she employes to retain his interest. She's not the only lady to share the King's "wealth" either. Noooo... The King gets around, and so do his friends.

However, the show isn't entirely about sex, though there certainly is a lot of it. The historical accounts of the political rivalry between peirs of the realm and their religious counterparts is riviting. There's some blood, a lot of temper tantrums and more backroom scheming than you can shake a stick at. I love it!

Season Two came out this week and so far, it hasn't let me down. The King has a little gotee, the Duke suddenly acquired morals and Peter O'Toole joined the cast as the Pope! Once again I'm glued to the "boob" tube (ha ha!) and I'm enjoying every minute of it. So, if you're looking for a smart, sexy political drama I highly recommend the Tudors. You won't regret it!
Posted by calicobebop at 10:01 AM

So is it in the actual time of King Henry? Cuz those pics look like it's from the time of As The World Turns.

I love this series. I also Netflixed it.

omfg they're all so HOT. but i won't be checking them out anytime soon. heck, i seldom have time to watch ONE show, let alone get involved in an entire series. but thanks for posting the pictures.

and that's all i have to say about that. *cough

You know, Henry Cavill is who Stephenie Meyer originally wanted to play Edward, but he was too old.

I think I need to watch this show, by the way! Rawr!