I finished the scarf over the holidays and I think it turned out very well. I chose a black tweed yarn as well as a pretty lime green that picks up the green in the tweed. I tend to drift towards green these days... Not sure why, maybe because it's so brown and dead outside. Who knows. 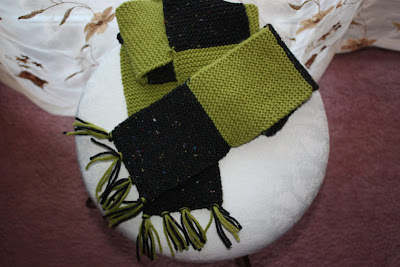 So, I snapped this picture on my little white stool but it doesn't properly represent the length and fabulousness of my scarf does it? 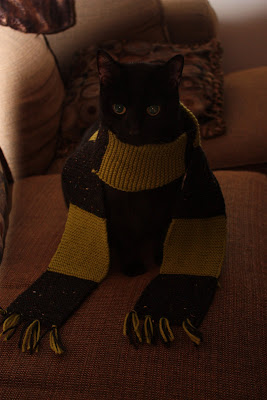 I was going to try and snap a picture of myself modeling the scarf - but decided to spare you folks because I was having a seriously bad hair day (not that that's anything new). Muffin was busy but Louis was free! In fact, I think he looks quite dapper in my scarf. 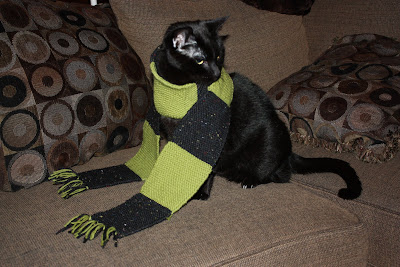 The look on his little kitty face is priceless. I believe he's thinking something along the lines of: "If I were younger I'd find a way out of this damn thing. Since I can't, I will solace myself with the fact that you fill find vomit on your carpet in the near future." Ah, sweet sweet kitty love.

Now-a-days I'm working on a baby afghan for a friend who is due in June. It's about half-way through and makes a wonderful lap warmer on a freezing January night. I also spent a ludicrous amount of money on some froo-froo yarn that was 40% off! I see some fancy scarves in the near future! Stay tuned!

Also, ONLY ONE MORE NIGHT UNTIL LOST!!! I'm getting seriously hyped up. Can you tell? 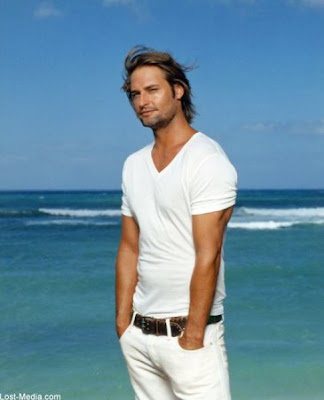 Posted by calicobebop at 7:45 AM

Louis looks fabulous! thx for my comment today..How could i say no to a Marine..

hahaha...love Louis in the scarf, that is HILARIOUS and worth the puke on the carpet...well...to me anyway.

Great job, you have come along way from the dishrag days. ;)

I am amazed you got the cat to sit still! Love the scarf.

Very nice scarf, and I love Louis as your model! My cat would have puked on the scarf!