And How Was Your Halloween?

Mine was great - thank you very much. I spent it at home, with the classic movie station and vodka. My other plan was to get a tattoo but I figured it would be too busy on a night like Halloween.

I saw a Pocahontas, a Belle, a Batman, several teenagers, a ballerina, a couple of witches, a Cinderella, a scary man with a clown face on (I didn't DARE deny him any candy - but I wanted to.), a pretty mermaid - not Ariel, Super Girl, and an ADORABLE little lady bug (I totally wanted to keep her she was so precious - but I think that's frowned upon).

I also served some sort of Power Ranger-type ninja, a zombie, the pretty not-Ariel mermaid again (wtf?), the Predator, a zombie doctor with insect eyes (creepy!), a cheer-leader, a FEMALE transformer (you go girl!), a spider, a Pink Power Ranger, more ballerinas, another batman, a rock-star (thankfully not Hanna Montana).

Most interesting quote of the night "I wish your little brother could walk already! That way I wouldn't have to carry his bag!"

Said by a young woman escorting a lovely little Princess Belle with her husband waiting at the road holding a baby carrier. I mean, isn't that basically just telling me that you want more free candy? It's not like the infant is going to eat it! Shameless!

Things got started around 6:15pm and I ran out of candy around 8:30pm.

All in all I feel satisfied that I performed my duties as a Halloween hostess quite proficiently.

Perhaps not as proficiently as THIS Halloween where I hosted a party and declared my undying love for James Bond to my friend Joel* the Jester - but proficiently enough. For children. 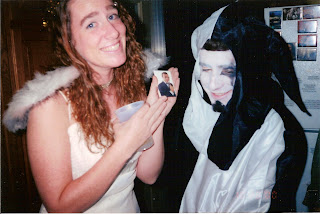 (yeah, I did find those pictures and yeah - I was that D-runk.)

Hope ya'll had a wonderfully spooky evening! BTW, if you ever come around to my house on Halloween: One door bell ring/knock is enough. There is NO NEED WHAT-SO-EVER to ring the bell three or four times and then knock on the door. Trust me. I hear you. And yes, I have the "good" candy. So keep those eggs and that soap to yourselves. Have Fun!

*the names of the innocent have been changed to protect their anonymity. Such as it is.

Posted by calicobebop at 6:45 AM

awe, sounds like a fun night! love the picture!

i have some great pictures that i'll post after i post more pics from the trip to socal.