Old MacDonald had a ... chicken nugget? 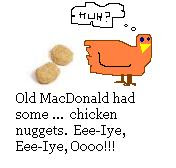 Please excuse the poor drawing. I can't draw for crap.

I know I don't talk about Muffin enough (*cough*) so I felt the need to share this little tidbit that occurred when I got her back from her daddy last night.

As I may have mentioned in previous posts, I'm trying to raise her without the joys of television and commercials because I'm an evil person I don't think brand recognition is good for young kids. (edit: except for Disney and Dora. Nobody's perfect.) We rarely go to fast food but when we do (usually to wait for daddy) she only recognizes the restaurant as "the place with the playground inside." Ok, enough - because I'm not trying to be preachy here.
When Muffin and Daddy arrive (1 hour 15 min. LATE!) the first thing she says to me is:
"I ate dinner at Old MacDonald's! I had chicken nuggets!"
At first I didn't quite comprehend what she was saying. I mean, she's four - most of the things that come out of her mouth are bizarre. But later, when we're driving home she points to the Golden Arches and says:
"Look, Mama! Another Old MacDonald's!"
McDonald's = Old MacDonald's. I see now. She's been corrupted. Philosophically speaking, I know it was bound to happen sooner or later. I just hope that I'm not the one who has to explain the disparity between "Old MacDonald had some chickens" and Old MacDonald serving chicken nuggets. I'll leave that to her dad.
Posted by calicobebop at 9:21 AM

lol...my kids call it Old McDonalds too. We have this so-called food about once a week (rolls eyes). Last night was the night and did you know there are 250 calories in 6 chicken nuggets??? holy schmoly.