So. Much. Awesomness. But first, here's my favorite quote: 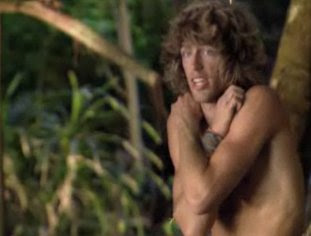 I like this quote for two reasons: First, it highlights how good natured Erik is. I don't know about you, but I was surprised at how a guy his age can get drunk, cheerfully vomit and bounce right back. He was all "damn that bedel nut" and then said "I'm going to get something to eat!" What a trooper! Second, I've uttered very similar curses - only they went more like: Damn that vodka tonic, or Damn that last shot of Tequila. And for the record, I wasn't very cool about it - unlike Erik. I made sure everyone in the general vicinity was aware of my suffering because I'm a prima donna that way.

The challenges were alright - nothing we haven't seen before. I was frankly surprised to see the team with James, Alexis, Natalie and Parvati actually ahead of the other guys. But, of course, they lost in the end. Nothing is more bitter than choking at the last second. Ahhh, bitterness. I know thee well.

Reward was entertaining - again an Erik highlight. He was all "BOOBIES!" and I just had to laugh. You have to admit, Ozzy's description was pretty much spot on - he's an adorable, naive little puppy. Who managed to out-scam Ami. Which is a pretty lethal combination when you think about it.

Poor Cirie! Stuck on Exile, in the rain, without any hope of finding the idol because it's in Ozzy's pocket. I really felt bad for her and I can totally see why she would cook up the scheme against Oz. I mean, if I was picked last and sent to Exile - in a storm - I'd be plotting serious revenge too. Remember Sandra from Pearl Islands? Remember when she thought she was going home so she sabotaged the camp? That would have been me. I'd have come back from Exile with a sweet smile and an evil heart. Go Cirie! I'm starting to kind of like you again (but I'll never forgive you for ousting Yau!)

Immunity challenge was fraught with unwise choices. First, how confident are you to give up IMMUNITY for some stupid candy/donuts/pizza/whatever? As I've said before, I'm not there so I don't know how they suffer, blah, blah, blah. I do know that Immunity guarantees one more day on the island that's one step closer to a million. Donuts? Million? Hmmm?

Anyway, Alexis dropped her hand without seeing what Jeff had and when he denied her the treat (DENIED!!!) she got all mad and he said something like "Yeah, go off and sulk over there on the bench." God, I love that man. Then, Ozzy dropped his hand for three stupid donuts? Dumb-ass. Finally, Jason somehow got conned by Parvati into making a deal with the rest of the tribe so that they could all eat. Double Dumb-ass!

And finally, the tribal council that made my week. Oz had no idea. NO IDEA! First there were smug smiles all around, followed by incredulous looks of "Wait? More than one vote against me/Ozzy?" Then, that turned to looks of horrified realization "F*ck. We've been double crossed!" And finally, at least for Ozzy, the sour grapes. As his torched was snuffed he turned and glared at the entire cast. So beautiful! In his final words he cursed his double crossing team mates and said to the offending party "Right now, I pretty much hate you. Screw you!" 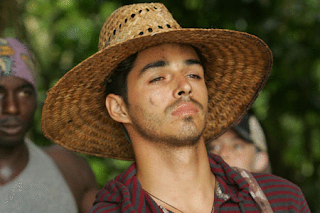 I curse all of you, and your children, and your grandchildren and your pets too!

As lovely as that was, it was the look on Eliza's face that really made my day. Bug-Eyed surprised mixed with devilish delight! Mouth wide open, head whipping around - she was the perfect pantomime for the entire proceeding. Cirie was second best - smug and relieved at the same time. Parvati looked as though she was feeling a twinge of regret and James, of course, was a picture of outrage. Ha! Good luck getting in his good graces again, Parv.

Amanda looked downright crestfallen. There went her cash-bull! She'd better start scrambling to make up with Parvati so she's not left out again (and next Immunity challenge I suggest you go potty beforehand, ok?). In the previews, it looks as though she does just that and the females form Team Estrogen. Too bad Ami couldn't see this, she'd have been so proud. *sniff*

Posted by calicobebop at 8:51 AM

I love Erik's wide eye approach to all of the new experiences. What a trooper indeed!