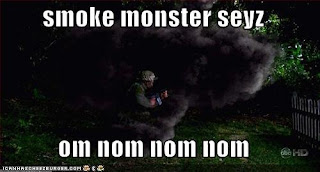 Quick, quick thoughts on my two favorite shows - I know I'm way late but I have reasons. Actually no, I don't. I'm a terrible procrastinator and we all know it.

But hey - guess who was in a TORNADO yesterday? ME!!! And my Muffin! And it was scary and loud and really sucked - but we're OK. Yay.

Anyway so, Lost - Back with a vengeance! Or, Bengeance as I like to say. Because sometimes I think I'm clever and I insist on sharing.

Am I the only one who is kind of re-thinking my initial distaste for Ben? I feel sorry for him now, but I still think he's creepy. Sayid is a hot hot hottie and I wonder why I never saw him that light. Maybe because he had the misfortune of falling for (*ick*) Shannon? Hmmm, maybe. Anyway - love him now! Love Sawyer - love how he wanted to protect Hurley's curly head. Awww... Love how he managed to avoid a rain of bullets - thus proving that he is indeed rather god-like.

Curious as to how Claire managed to emerge from that blown up house relatively unscathed. What's up with that? Very curious about Smokey and Ben's ability to control it. (And hey, Ben? Can I borrow Smokey?) Definitely wondering about the freighter doc who is still alive? Or something?

Could really care less about Jack's abdominal pain - we know he makes it. Not especially sad about Alex, more sad about Rousseau.

I love how the commercials are painting the Hidden Immunity Idol out to be some sort of curse. It's not a curse - it's just in the hands of idiots! That's all! Now, don't get me wrong - I loved the blindside of Ozzy because he was cocky and deserved to go down. However, I felt a little bad for Jason (even though he was quite often a jerk) because he was mentally unprepared to do battle and those ladies took advantage of him.

On the flip-side, I'm liking Parvati more! I never thought I'd say that - but there it is. James is amusing as always and Erik is doofy. The other girls are forgettable, which is probably exactly what Cirie wants. She wants to pull the strings and let others take the blame. Gotta respect that!

In an exit interview Ozzy said that goes off on someone. So, that probably means that either Parv or Cirie makes it to the end. I'd like to see it come down to those two. Sure, they aren't Fans, and I was really rooting for the fans, but they've played the game to the best of their ability. I guess we'll wait and see!
Posted by calicobebop at 10:56 AM

ok.
lost. am I ever? so many questions. I love your run down and then THROWN in there about you actually being in a tornado..I glad you survived.

So speaking of survived...DUMBASS (not you) Jason...HELLO. Ugh, don't like Natalie either...I mean, I don't even know if that is her name, where has she been up until now...and what show does she think she is runnin? I can't wait until the girls turn on each other, THAT is going to be GOOD tv.

Yes - CAT FIGHT! I'm ready for them to pull out the mud and have a wrestling match at the final TC.

well, I don't know about all THAT, but whatever floats your boat sweetie ;)