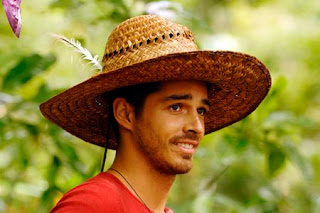 I love the little pause between "took" and "hours." To me it indicates that Ozzy was trying to come up with a plausible amount of time to make the destruction of the fake HII more poignant. In truth, I think it took all of five minutes to make. And that includes finding the stick.


Good episode, though! I love the Merge! Typically we get to see more drunken obnoxious behavior but overall I was satisfied. Amanda was peeved by the wanton behavior of Alexsis... Actually, I think she was more peeved by the faithless behavior of Ozzy but she couldn't take it out on Oz could she? She and Parvati are playing the old "ride the coattails of a strong dude" game and outing Oz would eliminate her cash cow. Or bull, as the case may be.


And yet, the flies. THE FLIES!! Did anyone else notice the swarms of flies that were ALREADY feasting on the Merge Feast? I did. I creeped me out. Yes, I'm sure that if I were a Survivor I wouldn't give a damn, but I'm not a Survivor. I'm a single mom with a clean kitchen and the flies grossed me out. bleh!


Know what else grossed me out? The challenge. Normally my heart rate accelerates because there's so much tension/action. This time, my hear rate increased because I was empathetically drowning with those people.


(Aside: This is why I can't do anything in the horror genre. I get too emotional about it. It's like I'm actually living the horror. Yuck and scary.)


By the time the challenge was over I had a cold sweat. I hope they strike that challenge from the books because it was too brutal. But keep the one where you tie two people together - that was brutal yet entertaining! :)


I'm sad to see Eliza go. She was fun and spicy. Amanda and Parvati are so boring! Come on girls - you guys control the game now! Make it interesting!!! The exchange between Eliza and Jason concerning the not-exactly-HII was awesome, and I paraphrase:

Eliza: (after walking quite briskly across the entire camp to chase Jason down) What are you trying to pull here? I mean, I'm already getting voted out!

Yeah, she had to break it down for him. It's a STICK!!! But, in this game you play what you have. Sadly, Eliza only had a stick. So long Eliza. Thanks for all the bug-eyed eye rolling!
Posted by calicobebop at 9:06 PM

I liked how Jeff commented "It's hard to miss it when you roll your eyes" to Eliza. Maybe she is annoying, but she did make for better tv than Parvati and Amanda.

You're so right. She was annoying but she was an underdog from the word go. I like underdogs, usually. However, I'm really not rooting for any of the Fans. I think a Favorite will take it all. Probably Mr. Smug - Ozzy.

I loved this episode...Ozzy is hilarious and Amanda is TOTALLY jealous...