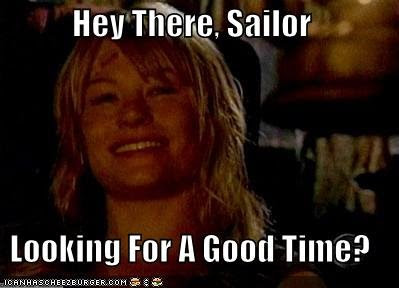 What a great night of television. I'm glad that I decided to watch ANTM in between Survivor and Lost - now I have all my favorite shows in one night! Whoo Hoo! Which to talk about first...

Survivor - TC is a bloody battleground. Four weeks in a row.
Yet another great episode. And I thought last week was going to be the end of the blindsides, but no. Poor, poor Erik was spun around blindfolded, let loose and asked to make a decision that ultimately cost him the game. In the clip I posted previously JP notes that Erik would have been a shoe-in for the win. And a likable guy on top! But those wily women convinced him to give up immunity in order to prove that he was trustworthy. While I feel a little sad for Erik, I am elated for reality TV. Very entertaining.
Sadly, I will not be able to watch the finale on Sunday due to previously arranged plans to be with family (it IS Mother's Day). But I will savore the two hours of challenges, backstabbing and ultimately TC Jury Fury for Wednesday night when I return. I just have to figure out how to stay away from any and all media references in the meantime...
ANTM - WHITNEY IS IN THE FINAL THREE!!!!!
When Tyra called her name second, after Anya, I let out a silent scream of elation!! (silent only because my daughter was asleep) Finally, a "real-sized" model making it to the final episode! I'm over the top. I realize that it will most likely come down to Anya and Fatima but I'm glad that Whit made it to the end. Thank Gawd Domonique was booted - took you long enough Tyra! And for what reason? Because she looks like a tranny. I really can't add anything to that. I don't think Fatima is all that great, but Anya is pretty consistent. I pick her for the win.
Lost - well, well, well...
So, Claire is possibly dead. That would explain why she emerged unscathed from the destroyed Other house. It would also explain why Miles was so interested in her. Is it me or did she look like a grubby pirate in the cabin? Seriously! Just because you're dead doesn't mean you can groom yourself, Claire. Look at Christian, he's pretty tidy! Get a hairbrush.
Also, it appears Locke was destined for the island from day one! I suppose that shouldn't surprise me. I'm always surprised to see the ageless Others. What is up with those guys! I was reading some theories earlier in the week and one fellow over on EW (I go there a lot) suggested that Charles Widmore is actually the Captain of the Black Rock and that he is trying to get back to the island that he discovered - HIS island. The others would therefore be his crew? Hmmm, well what about the ladies? It was a slave ship, so maybe the ladies were part of the cargo. I guess we'll see... I like the theory though!
Lastly, how in the wide world of sports are they going to move the island? Are they going to put it on Smokey's back and ride off into the sunset? Could the move account for why Jack can't seem to make it back? What about Sayid, Mr. Keemi, Desmond and the Captain of the freighter? Who's really in control? Is Michael's story-line over? So many delicious questions. Only a few episodes left.
Posted by calicobebop at 9:27 AM

i was dying when I watched survivor, yelling *quietly cause my kids were sleeping too* NOOOOO ERIC DON'T FALL FOR IT. UGH. I always root for the underdogs and darn it...DARN IT ERIC. You big dummy.

I really hope Amanda wins this thing. Seriously. She needs to get Cirie out of there and then SMOOTH SAILING baby.

If I were a guy, I would totally do Amanda, she is so cute...and ruthless..but sweet about it. GROALS.

OK, so if I am on the woman hotness, WHITNEY, is awesomes. I wanna be like Whitney...she really ROCKS. I don't know if she will win, but LOVES that she is in the top 3!

On a different note, your post about being all about you...and your need to tell a story to relate to whomever you are commenting...get this.

*i* have been so concerned about what (or what not) my hubby and kids will do for *me* on Mother's day that I have not even THOUGHT about what I am doing for MY OWN mother...so
yeah.
how's that for selfish and relating with stories?

I shall blog it.

can I write more of a novel in your comment section?

Forgot to say, have a happy happy mother's day.