Lost, Survivor and ANTM - In One Fell Swoop! 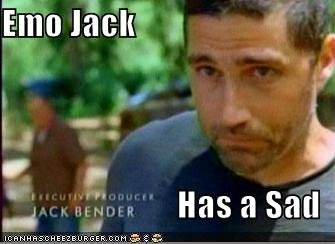 Starting first with Lost and my new obsession - making lols from Lost screen captures. Who needs more to do at work? Um, not me?

This week's Jack-centric episode was somewhat enlightening. I believe this episode comes before the finale from last season. If so, that explains why Jack, hovering on the edge of the deep-end, finally took the plunge into Crazy Land. Poor fellow. Hallucinations, drugs and crazy sex with the girl you love will do that with you I suppose. Oh, and the jealously. Yes, the jealousy - that will certainly do it.

Aside - I think I know what Kate was doing. I'll bet Sawyer asked her to go see his kid - the one that the woman who visited him in prison referred to? I'm pretty sure she was just passing on a message. But, of course, I could be very wrong.

Otherwise, not much went on this episode. We saw Jack begin to unravel, Hurley tearily passing along messages and Kate playing house. We saw Claire get lured into the jungle by her Dad (Dr. Sheppard making quite a few appearances these days!) and we ended with Sawyer taking possession of Aaron.

What did we learn? That Rousseau and Carl are really dead (DAMN!!), Charlotte can speak Korean (Cool!), Jack is not superman (duh), Kate really loves Jack (whatevers) and that Jack is not supposed to raise Aaron. At least I think that's what Hurley meant - although my first thought was in reference to Jack's Dad. Maybe Jack's not supposed to raise the dead! Who knows! It was way past my bedtime and I was sleepy.

Ok, moving on to Survivor - another great episode!! The tribal council almost had me convinced that Amanda was going home. If she makes it to the final two/three she'll be tough to beat. Although, the little victory dance up to JP might not win her any friends. Way to rub in their face Amanda! (Who am I kidding - I'd do it too!).

Natalie is looking more and more like the Devil to me. I just don't like her. As Debentropy pointed out - she looks like a rat. I was sad to see Alexis go, but I can appreciate the strategy. She's pretty likable too. I was super sad to see James go because he was always a source of humorous one-liners. Still, sporting the IV at TC was pretty hot. He rocked it!

Finally ANTM. So glad that Whitney is still in the running towards becoming America's Next Top Model. So glad. The fact that Domonique remains is still a mystery. I have a feeling that Fatima will be leaving soon since she's been getting a lot of face time lately. Anya seems like the pre-ordained winner this cycle and I'm fine with that. Sad to see Katarzyna go, but better her than Whit! Whoo Hoo - "real sized" girls unite!
Posted by calicobebop at 9:21 AM

ANTM-Whitney is a stunning girl, isn't she?

Survivor--go AMANDA, I loved every minute of it and the jury's faces were GREAT! Natalie is just...fugly.

Lost...man, man, man. I too think that Kate was passing on a message to someone for Sawyer. Jack can't be Aaron's father because he is really his UNCLE...or is there other reasons that he should raise him and your thoughts on raising the dead...WOW. Never thought of that angle. Where the hell did Claire go? Yikes.