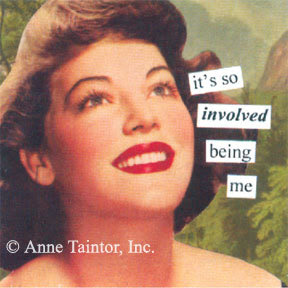 It recently occurred to me that I'm incredibly self-involved. Not necessarily self-ish, but definitely self-involved. I have self-related thoughts pretty much all day long. Sure, they're interspersed with various daughter-related or work-related thoughts - but mostly, it's all about me. And of those self-related thoughts, most of them are focused on my weight. I thought about doing a spreadsheet to see exactly what percentage of time I spend fixated on my weight but I didn't want the interwebs to see what a dork I am who has the time for that? *ahem*
In addition to thinking about myself quite a bit, apparently I like others to think about me too. You know that person who finds some story in their own life to relate to the anecdote you just told? Yep, that's me. I've tried to get a handle on it as I've grown older, but it's a habit that's hard to break. I promise, I'm not trying to one-up anyone! I guess I just want to relate. And make people pay attention to me. But I'm getting better!
Therefore, I'm resolving (sort of half-way through the year) to try and focus my attention elsewhere. Perhaps on a pretty flower or maybe world hunger. I can't guarantee results, because I'm 33 years old and lets face it - this is a lifetime habit. But, I'm determined to think of something, ANYTHING, except my big fat ass.
Hmmm, speaking of my bum... Have you read I'm No Belle? Stacie turned me on to her blog and I was crying at my desk on Monday because it had me laughing so hard. In this post she talks about the origins of her "Sea Captain," a euphemism for her bottom. (By the time I'd reached that particular post, I was gasping for air and my work neighbors were giving me the "are you sure you didn't have a three martini lunch?" stare.) At the end of the post Scarlette asked what we would name our bottoms. The first thing that popped in my head was Jolly Roger.
**Actually, the first was Pirate but there are already way too many references to "butts" and "pirates" and I don't care to have any of them refer to me. (Not that there's anything wrong with that...)**
So um, yeah, technically, the second thought was Jolly Roger because it's still vaguely both Pirate and Navy related. Seeing as I'm in the Navy and I'm a graduate of ECU (Home of the Pirates) I thought it was fitting. However, upon further reflection I realized that Roger may not be very jolly after all. I mean, Roger hasn't actually gotten his jollies since my FOUR YEAR OLD daughter was conceived. So, maybe just plain Roger would be more appropriate until such time as he becomes jolly again.
Therefore, I resolve not to think about how fat and un-jolly Roger has let himself become. Right after I drink this bottle of tequilla. *sob*
Posted by calicobebop at 3:23 PM

oh stop, it's ok to think about yourself, we as woman don't think about ourselves NEARLY enough.

I love "I'm no Belle" she is hysterical and I wish I could come up with blog topics as well as she does.

Poor Roger, if you think anything about your Roger you should be thinking he needs him a (tries thinking of a great girl name) GINGER. :D Four years is way too long my friend ;)