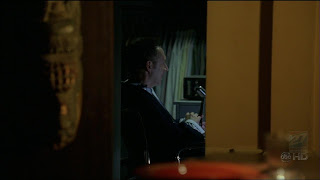 "Then consider yourself one of the good guys."

I chose this quote because the phrase "good guys" has been dropped repeatedly throughout this season. Actually, as the intro to Lost reminded me, it was first dropped by Ben at the end of season 2 when he said "We're the good guys, Michael." In this season the freighter folk, Ben and even Bernard have claimed to be the "good guys." Although I believe that it's possible for more than one party to be in the right - I'm pretty sure that we're going to have to decide between Ben and Charles Widmore in the end.

The question of Ben v/s Charles is intriguing. I mean, both sides offer evidence. Both sides have "supposedly" innocent people working for them. However, neither side has a concrete reason for attack. In theory, Ben is simply defending the island, Jacob, the "hostiles" and the Oceanic Survivors from exploitation. In theory, Charles has a personal vendetta against Ben because he allegedly faked the crash of Oceanic 815. When you look at it summed up into those two sentences, I'd have to say that - crazy homicidal maniac that he is - Ben has the stronger argument. (And to think that his character was only going to have a small role in the initial vision of the series. Now Ben is secure in his role to creep the hell out of all of us.)

I have one thing to say about the conversation between Ben and Rousseau, Carl and Alex: Damn if Rousseau doesn't carry around a rifle and backpack like she's gonna bolt at any time. Right?!? I mean, they were just eating dinner in Locke's house! I suppose it's ingrained in her nature after all the time she spent on the island - but my Mama raised me not to bring a gun and a backpack to a dinner party. I'm so sorry to see her and Carl go. However, I'd rather it be them than Sawyer! (Whoops, I let my bias show through there - forgive me.) I must admidt that I wasn't surprised after Carl uttered the infamous words "I've got a bad feeling about this" and Ben said that Alex could be used against him. Wouldn't surprise me in the least if he had her taken out in the future just to keep another force from using her against him. That may seem cold blooded but we're talking about Ben here. Am I right?

Ok, this was an episode about Michael and I've yet to discuss him. Perhaps it's because I feel the same way Sawyer does when it comes to Walt's daddy. "I'm sorry, you mean the same guy that killed two women in cold blood, set this little bastard free and then sold all of us out so he can get off the island - that Michael?" I could really care less about him. When I saw him crash his car I initially thought that this was the funeral Jack attended at the end of last season. Alas, the island didn't let Michael go. How creepy is that! The island won't let you kill yourself?!? For real!?! I know some emo guys on campus that would actually be reassured by that kind of thing...

Seeing Mr. Friendly again was really super. He was a great adversary and it was interesting to see how they illustrated that Kate is not his type after all. Hello, Arturo! (When you decide to bat for the other team, call me!) It was also interesting to see the photo of the graves which supplied the bodies of the fake Oceanic 815.

Here's a question or two: Would the guy who stole the bodies take a picture? Or would the guy trying to expose the grave-digging snap some evidence? I wish I could say that I was inclined to believe in Ben but he's such a creepy VILLAIN! He's a murderer! He's a forward-thinking lunatic!! I wouldn't put it past him to stage the whole thing! It's just that I really have no idea (other than profit) why Charles Widmore would go through the trouble of finding the island. Not that profit isn't a great motivator, but we're talking about grave-robbing, freighter funding, and a huge falsification of evidence in the case of the airplane, black box, bodies, etc! It would be easy to attribute all of these efforts to a severe case of megalomania - but doesn't that describe Ben? So this means that the creators of Lost have us right where they want us I suppose.

Well, I'm flummoxed. I don't know who to believe. At this time I have a very distinct bias against Ben, but who knows - Ben could be the savior of the island. The island that kills people in their second trimester of pregnancy. What on Earth is going on? Ultimately, I'm going to side with the survivors of Oceanic 815 because they are unwitting pawns in a game that has apparently been going on for quite some time. Sadly, we won't see the next episode until April. Thanks to school, I'll have plenty of things to occupy my time. But, will I be satisfied? I think not.

it is a friggin mess. Ben is one of the creepest men on earth...er islands or wherever the hell they are.