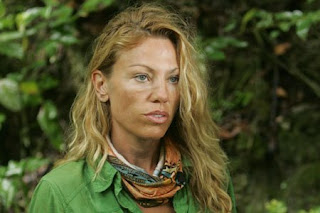 "I'm very intuitive and I know a lot of stuff just because I
do. Because I'm born with it."

This quote came from Tracy who is a member of the "old folks" faction of Airai. It was her killer dialog that persuaded Joel The Hulk to team up with the old folks and convince a couple of other team members to vote off Mikey B. I could be wrong, but I seriously believe that the Fans are going to lose on account of Joel. He clearly knows the game but he's making power plays WAY too early! Seriously! You have to win some challenges to ensure your side makes it to the merge with higher numbers than the other side - right? For crying out loud! It's SURVIVOR 101! (Which I should teach, by the way).

(Aside - I have to secretly admit that I admire Tracy and her team of denture-clad weaklings. For Real! She had a good argument and a likely target. As such, Joel was putty in her able hands. But then, he'd be putty in a chimpanzee’s hands given his level of intellect. Oh well.)

So. Aside for Mikey B. getting his arse voted off what else did we glean from this episode? Well, let's see...

Kathy - she's been sent to Exile Island THREE FREAKING TIMES and hasn't found the idol. Or even tried (after the first go around)! Kathy - you silly wench. Get off your ass and look for the damn thing! Except...

Ozzy - found the stinking hidden imunity idol. Yep. Mr. Challenge Hog himself has acquired an immunity idol. Well, I'm sure the bookies in Vegas have a pretty clear winner for this season and that's all I'm going to say about it. Harumph!

Eric - Boy, you continue to amuse me! Not only did you enter this competition vowing to replace Ozzy as the most "survivor" Survivor - but your screen-cap labels you as an "ice cream scooper." Which pretty much qualifies you as... well, I really have no idea. However - that spill you took in the Immunity Challenge? PRICELESS!! You cannot buy that level of entertainment. It was worthy of a spot on "America's Funniest Home Videos." Leap over a log, slip and land on your head. Ok, maybe it's just me but I think you need to work on your "Ozzy Skillz" and oh-by-the-way; your haircut stinks of the 70's and not in a good way.

Ok, highlights of this week's episode include:

Eliza's blatant attempt to join team Cirie/Parvati/James/Amanda/Ozzy. Even funnier - Jonathan following those two girls during their conversation. He is a player's player and unfortunately it's way too obvious.

Eric's spill - It was brief yet awesome. I will retain the image of his humiliation in my mind for as long as necessary to convince me that it's ok for men in the 21st century to have silly hair. (Which could be forever)

Mikey B's take on Airai losing the immunity challenge: "The crew of misfits, which is Airai, lost again. Not even close. Again! Yeah. Yeah, we got some talent." So, so true. And so, so sad that his witty banter has been snuffed. :(

The team name Airai: It's suspiciously phonetically similar to the word "awry" which would aptly describe the strategy of the Fans team, hands down. I wonder if Mark Burnett is trying to tell us something...

Ozzy's attempt to emulate Yau Man: After finding the hidden immunity idol Ozzy tried to fashion a substitute to fake out the unfortunates sent to Exile Island. Sadly, it was only a shaved stick. However, points must be given for having enough brain cells to rub together and come up with idea. Oh wait - he didn't. That was Yau. Who was voted off last time. Damn.

Finally: Jason - Not only did you attempt to salvage an un-salvageable lead in the reward challenge, but also you alone held up your hand and halted Jeff Probst. Jason, when you pre-empted Jiffy P's traditional statement of "it's time for the vote" with your hand gesture and subsequent monologue - I kind of fell in love with you. Never, in the history of Survivor, has a contestant even thought about overriding Jeff's authority - You Broke The Mold. I applaud you. Call me!
Posted by calicobebop at 7:49 PM

omg, I love your recaps!!

Major kudos to Kathy for her persuasion, but as you said, easy target.