Sarcastic Mom is having a Carnival of Labor and I thought it would be fun to participate. Ok, so here goes, try not to be shocked or appalled. Please?

Let me begin by saying that I didn't know I was pregnant until I was almost five months along. Ok, stop rolling your eyes. I know what you're thinking: How can any woman be nearly five months pregnant and have absolutely no idea? Here's how: I didn't gain much weight, I was accustomed to not having my period and the last time I'd participated in the act I was on the pill and he wore a raincoat! Why on earth would I think I was pregnant? You're still doubtful, ok I'll set the scene:

Exhibit A) I had recently graduated from OCS, completed my Supply Corps training and was about to embark on my first deployment. OCS is pretty intense and due to the amount of athletic training we received, I didn't get my period for three months. So, when I checked on board USS Firstship, as the only female, I wasn't surprised when Old Flo didn't make her monthly visit. (Actually, I thought I'd cleverly outwitted her by making random circles on a ship in the Arabian Gulf.)

Exhibit B) Ok, here's a little TMI for you. When I'm in a strange place, I find it difficult to do #2. Take it from me, any US warship should be considered a very strange place. So, when I noticed a little belly going on - I chalked it up to constipation and did more sit-ups.

Exhibit C) When I received orders to USS Firstship I discovered that I was going to be the first and only female on board. Yay. So, since the Navy frowns on fraternization, I thought I'd better get my oats sown on shore before reporting for duty! Enter Muffin's Daddy. Now, I didn't choose this guy because I thought he'd be a great dad - I thought he'd be a great lay. And he was. He also wore protection and I was on the pill so I didn't think there would be any lasting repercussions. Hoo boy.

Well, on a port visit to Bahrain I decided to get a yearly check-up and as part of the process they gave me a pregnancy test - which I passed with Flying Colors!! Needless to say, it came as something of a shock. Two weeks later, I'm back in the USA and going to my first check-up. Now, coincidentally, at the same time I was coming home pregnant, my sister was leaving her husband! So she decided to meet me in Washington State where we could set up a house of sin together. Our parents have never been so proud.

From there, things progressed normally. I'd never had morning sickness and I to be honest I felt perfectly fine with my little bun in the oven. I even worked out every day in a futile attempt to ward off the baby weight. I ended up gaining about 40 pounds but it was so worth it. Can I just interject here and add that I loved my seventh month of pregnancy. I was totally showing and I could eat anything I wanted without anyone looking askance. Do you realize how rare that is for women? I mean, seriously - I always feel like I have to justify every bite of food that enters my mouth. Moving on...

I had been given an estimated delivery date of 12 Jan 2004 so imagine my surprise when my water broke on 15 December 2003! While I was Christmas Shopping no less. Yeah. Fun. Well, I drove myself home and called the doctor who instructed me to go directly to the hospital - do not pass Go, do not collect $200, do not even wait for my sister (who works in Seattle, a 45 min ferry ride away) - GO NOW! So, I went! I drove myself to the hospital, alone. And I forgot the camera.

I get to the hospital and, after establishing the fact that I'm pregnant, the water broke, I'm ready to deliver they finally get me to the Maternity Ward. I ended up pacing around the waiting room while they tried to find somewhere to put me. That's where the labor started. At first, I thought - "no big deal, this is do-able" but I quickly changed my mind. I finally got a room and (did I mention that this is touchy-feely WA state?) they asked me if I wanted to bounce on the birthing ball. No. Did I want to get in the birthing bath? No. No, I do not. I want a doctor and I want some drugs and I want them now. I tried to be as nice as possible to the strangers running in and out of there because it wasn't their fault that I was trying to pass something the size of a watermelon. However, when they presented me with the "happy face" scale and asked me how I was feeling I think I might have screamed and cried at the same time. Not my finest moment.

Enter the doctor who immediately sent for the anesthesiologist who immediately administered an epidural. (Let me just say that if Muffin had turned out to be boy I would have named him after that beautiful man with the drugs.) Enter my sister - having finally arrived from Seattle, breathless and sadly, without a camera. Well, she arrived just in time because I was pretty much down to pushing and ready to get it over with.

The doctor asked if I wanted to watch myself give birth and - without waiting for an answer - she wheeled over a full length mirror and placed it smack in front of the action zone. I'm not a vain person, but I do try to avoid looking like a hot mess whenever possible and seeing myself in that position was absolutely horrifying. I immediately requested for it to be removed. (Actually, I think I was huffing and puffing and pleading with my eyes to my sister to make the ugly mirror go away). Then, suddenly, Muffin was here. Four hours after my water broke! Fastest Labor on EARTH! I guess I'm a baby machine.

She was red, and wrinkled and covered with nasty white stuff but I fell in love immediately. They put her on my chest and it was a perfectly wonderful messy heaven. I couldn't take my eyes off of her. Then they took her away to clean her up, check her hearing and stuff like that. Meanwhile, I did all the post-labor stuff that nobody likes to think or read about. When they brought her back I nursed her for a little before we both fell asleep.

Did I mention how I forgot the camera and my sister didn't have it with her either? Well, thanks to the staff of Naval Hospital Bremerton we were able to borrow a camera and here's the picture. Aww... So tiny and precious. 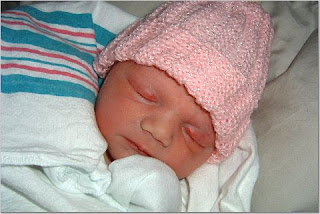 If you want to know about Muffin's Daddy, how he found out, what happened next, etc. you'll have to wait for another post - this one's perfect just the way it is.
Posted by calicobebop at 1:15 PM

I clicked over from Lotus's Baby Carnival. I loved reading your birth story - very interesting, but now I am QUITE interested to know about Muffin's Daddy and how you met him!!!