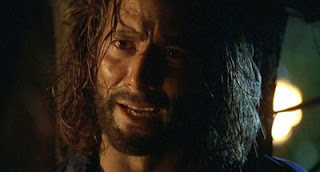 "I know about Eloise"

This one can either be attributed to Dan or Desmond as they both said it - but since it was a Desmond-centric episode I'm giving him the nod. And, can I just say that I absolutely loved this episode! I think Desmond is pretty foxy and I've always hoped that he and Pen would end up together in the end. That phone conversation on Christmas Eve where they were finishing each other's sentences - Oh My God I was in tears! Quite moving. Yes, quite.

Aside from the fantastically romantic end (*sigh*) there was a lot of cool stuff going on! First off - we got to see the freighter. Not much to look at really - kind of grimy actually. The natives were not all that friendly, but I suppose that's to be expected. Desmond's antics landed him in "sick bay" with someone experiencing similar troubles - the infamous Mr. Minkowski. Poor fellow is strapped to a bed and it seems as though Desmond might end up the same way! HOWEVER, after Sayid and Frank (the pilot) break into sick bay in order to let Desmond talk to Dan (on the island) and after Sayid and Des are stuck in the sick bay with crazy Minkowski - someone opens the door for them! My guess is that the door was opened by Ben's operative on the boat - but I could be wrong. At any rate, their escape and subsequent telephone call to Penny is aided by Minkowski before he ultimately croaks.

So, I guess the affliction that both Desmond and Minkowski suffered from is not exactly uncommon? Nope - turns out anyone could come down with it if you add together exposure to the island, exposure to electro-magnetism and/or exposure to radiation. Getting "unstuck in time" is fatal for most people if you don't have a "constant." Lucky for us, Desmond had Penny and it appears that Desmond will be Dan's constant too. Interesting! Remember the first episode of this season where Dan is sitting in front of a TV watching news coverage of the discovery of 815? In that segment he is crying and when the lady behind him asks "why" he responds that he doesn't know! Is that because he's "unstuck in time" too? I think so. I think Dan's a few cards short of a full deck. Still, you could say that about pretty much all the characters on Lost couldn't you?

Here's something that wasn't in the episode at all:

During this episode my sister and I were discussing the future of Locke - you know, now that he's gone bat-shit crazy. I think Jacob has abandoned him in favor of Hurley. I think that the "hostiles" (as represented by that hunky dark haired dude) are the original inhabitants of the island or maybe even the survivors of the Black Rock. Clearly time works differently on the island and if you recall - before Ben went over to the dark side and murdered the entire Dharma Initiative that hunky dark haired dude was wandering the forest in rags. So, they don't age and apparently they didn't have access to any new clothes before Ben killed everyone. I also think that these hostile natives need someone fresh to communicate with Jacob for some reason. Initially they liked Ben, but as time wore on Ben became a little hard to control. Eventually Ben started calling all the shots and I'm sure that didn't sit well with the natives or even with Jacob. Of course, I could be wrong - I frequently am.

So, along comes Locke. He's super happy to be on the island because it is a place where he can be useful and appreciated. He was kind of a loser on the outside and the island re-affirmed his belief that he was destined for something bigger. (Also the island made him walk again and I'm sure he was extra jazzed about that!) What's-his-name the dark haired native takes it upon himself to offer Locke an option (Sawyer) to kill his dad. This way, Locke can pass Ben's test and the natives will (eventually) gain a more controllable Jacob Liaison. Good theory! However....

Locke has a big head. And, he's got insecurity issues. Combine those two traits and you have a trigger-happy, self-deluded, wack-job with co-dependant tendencies. I could be wrong, but I'm sure that's not what Jacob has in mind for the successor to Ben. Not exactly trading up, right? Lucky for Jacob, there's another option in the form of Hurley. Hurley is already a little loony - remember his invisible friend? - but he's also a gentle soul that is capable of seeing right to the heart of the matter. I believe that he is the liaison Jacob, and maybe the natives, would like to see in office. But, there's still the small matter of Ben so we'll see how this all pans out.

Blah, blah, blah. Lots of words, very little substance. I enjoyed the episode and can't wait for this week's installment!
Posted by calicobebop at 2:03 PM