This week both ANTM and Survivor aired on Wednesday evening due to aforementioned programming changes that I was unaware of. Had I been, I'm sure the choice of which reality to show to watch would have been very painful. I suppose I should thank CBS for sparing me such agony. (insert sarcastic tone of voice) However, since I have little to say about either show I'll go ahead and combine the two favorite quotes and rundowns in the same blog.
First off: ANTM (because I actually watched it on Wednesday) 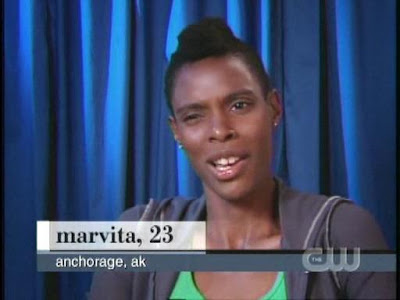 You have got to miss Marvita if only because of quotes like this one. Yeah, yeah I know - I said she shouldn't be on the show. Whatever. She brought some flavor to the otherwise bland landscape of ANTM. I suppose we'll have to rely on Anna Nicole, I mean Whitney, to amuse us in the future. I had high hopes for Anya but they seem to be reluctant to give her any screen time these days. I wonder if that's to save her story arc for future episodes or if she really has nothing interesting to say. Hmmm, it's a toss-up, really.

Speaking of story arcs, what's going on with Aimee? She takes great pictures, the camera "loves" her, her skin is "luminescent" and what do the judges say? That she is too much of a chameleon. ??? Isn't that what the industry wants? I have a feeling that she will go the way of Renee, Brittany and Jenah. Early front runners usually get humbled and dismissed so that the judges can crown their pet project. Prove me wrong Tyra!! Right now Aimee is the only girl with consistent talent.

Out of the other girls only Claire stands out to me. She's edgy and confident so she could go far and stay true to herself. Whitney looks like she's on the way out, Dominique looks like a man, and Fatima needs to eat a sandwich - for REAL! Looks like next week will bring another cat fight. Whoo Hoo! I'll make pop corn. 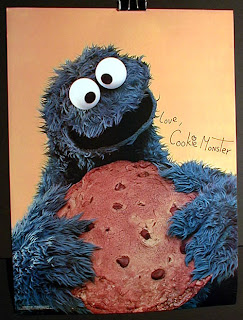 You gotta love the wide eyed innocence that Erik embodies. When he saw those cookies after winning reward I swear his eyeballs popped out. (Or maybe his eyeballs popped out because it was the first time he'd ever seen boobies.) I also find the Ozzy-Erik man love thing amusing. Cirie summed it up quite nicely when she said "I think if Ozzy were to propose marriage to Erik right now - done deal." Although I'm a little annoyed with Cirie for getting Yau Man voted off, I have to admit she's pretty funny. When I was looking for a picture of Erik I ran across this one: 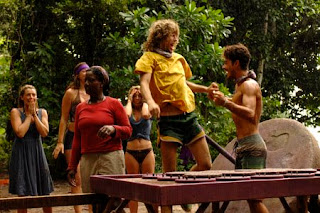 Doesn't it look like Erik is about to jump into Ozzy's arms? Awww, man love is sweet.

Moving on... poor Kathy. She just couldn't take it anymore. I know I gave her a hard time for not looking for the idol while she was on Exile Island but I feel bad for her. I guess Survivor is pretty tough. But wait, as a fan, I already knew that. In fact, I would expect that even if you only watch one episode of one season you would be familiar with the rough living conditions. Oh well, I shouldn't be nasty. I know I'm a big fat whiner and if I were on that show they would vote me off just to keep from hearing me whine about everything including the weather. Didn't seem to slow down their team much did it? Thank goodness for James, that man is the reason the Tailies are staying in this game.

(BTW, did you notice Kathy's guns? I hope my arms look that great when I'm in my mid-40's! Heck, I'd like them to look like that now!)

I'm kind of sad to see Tracy go because she was a real fighter. Sure, she was the reason Mikey B. got voted off, but you have to admire her strategy! It would of been awesome to see Oz get blindsided but lets face it, those girls (and Erik) are enthralled by him. You could see Ami chewing her lip and looking indecisive at Tribal Council. She'll just have to wait a little longer to form another girl alliance. Maybe only until next week if the previews are to be believed. Of course, in the preview Parvati didn't actually include Ami in this alliance but she might be able to worm her way in. Heck, she wormed her way in on the Amanda-Ozzy topless shower action! Leave it too Survivor to set up every opportunity for gratuitous flesh flashing. Ah, reality TV. Where would adolescent boys be without you.

Posted by calicobebop at 6:28 PM

cirie was HILARIOUS...and totally on point.

I am bummed Tracy is gone too, she at least was making the strategy good tv to watch.