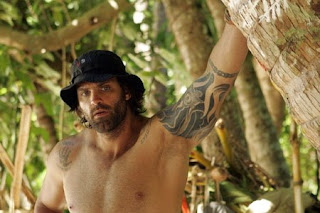 "If we went back to medieval times I think we'd kill him
ourselves."

Although this quote actually came from Joel, I believe it accurately expresses the sentiment that many felt about Joel himself. I was so happy to see the Incredible Hulk depart the island that I did a little dance. If you think I'm kidding just ask the cats - they were witnesses to my inanity.
Am I wrong or wasn't it a bit early for the tribal swap? Seems to me they let everyone stew for longer in previous seasons. Well, whatever, I was just glad to see it happen. Now I might actually give a damn about both tribes instead of just watching the Favorites and hoping the Fans vote off Joel. Debentropy likes to refer to the Fans as the Tailies (a Lost reference) as they are universally unloved and get very little air time. She's a genius.

This week on Survivor we witnessed Amanda wrestle a shark onto shore and further solidify her place as Ozzy's mate. Even Oz admitted that the whole shark-wrestling thing turned him on. She's pretty, smart, athletic and apparently able to sustain herself in the wild - what's not to love? I wish her, Ozzy and the Ozzlets a bright and happy future.

We also witnessed a new type of challenge that involved timed chasing. Normally, I'm all about the chase - I love the chase! (The catching is a bit tricky - but the chasing is fun!) However, the whole timed-chasing-challenge-strapped-to-a-partner was a recipe for disaster. People get hasty and are unable to properly calculate the distance between themselves, their partner and a tree stump. Right off the bat Jason went head-long into a tree. Parvati and Jonathan also wracked up some casualties but what struck me the most was this conversation between Joel and Chet:

Chet: I hit my head back there.

I mean, for crying out loud, Joel - you are such an ass! A gigantic hulking hairy ass (and I'm not sure I'm comfortable with the vision that phrase just conjured up.) I mean, damn - have a little sympathy for your fellow tribe-mate and challenge partner! I predict that this challenge will either be taken off the roster or pushed back for a couple of seasons.

At least the immunity challege was less physical. The whole "knock out a ceramic tile" challenge is hardly new to Survivor - but Jonathan really showed his pitching prowess. I was kind of glad to see Airai get immunity. In hindsight, I believe it must have something to do with subconsciously wanting to see Joel get the boot.

I had to have a little heart-to-heart with myself to discover the reason for my hostility toward Joel. Here's what I came up with: See, there are a lot of similarities between Joel and James - both physical and verbal, but there is a subtle difference in delivery. Whereas James just says whatever is in his head at the moment, Joel is a calculating bully. This is why we see James as refreshingly honest while Joel comes across as an asshole. At least, that's my interpretation.

One final thought - at Tribal Council, when Jeff announced that "now is the time to play the hidden immunity idol" I noticed that Amanda looked at Ozzy and that Amanda's action caused Ami to look at Ozzy too. Now, earlier in the episode it was shown that Ozzy only revealed his HII to Amanda, James and Poverty, I mean Parvati. So, I'm just curious to know if Amanda's action let the cat out of the bag and if so, what does that mean for the other faction of the favorites? Let's hope for some drama!!
Posted by calicobebop at 11:21 AM