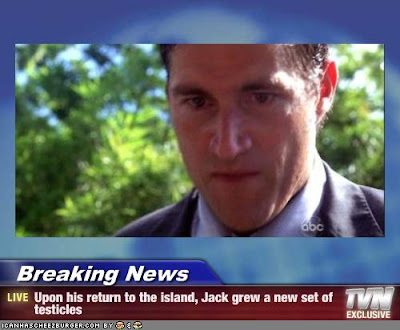 Jack wakes up and he's BACK ON THE ISLAND!!! You get the sense that he's pretty much ok with how this turned out. After saving Hurley and Kate we are treated to a flashback. 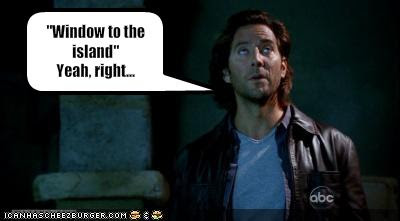 Desmond, Sun, Jack and Ben follow the crazy white-haired lady into the Lamp Post which is apparently a secret laboratory designed to find the time-hopping island. 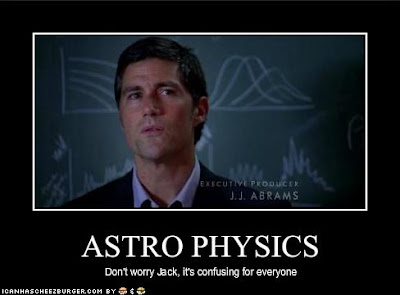 Yeah Jack, I was confused too - but don't worry! All it means is that you'll be going back to the island and that's what you want right? Know what would make that trip perfect? 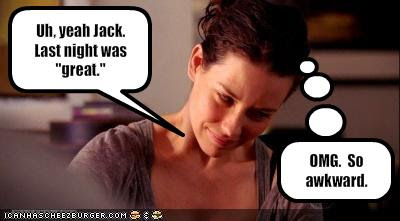 KATE! She is suddenly sans Aaron and requests (not very politely) that Jack never bring the little fellow up. Ever. He's all "Dude, I'm gonna get laid? I'll do whatever you ask!" 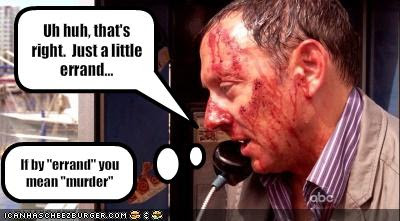 The next morning he receives a call from Ben who "had to complete a little errand" which scares the pants off of me because I'm really concerned for the health of Penny and little Charlie. I mean, Ben looks pretty beat up so maybe his little murder plan went horribly wrong. One can hope. 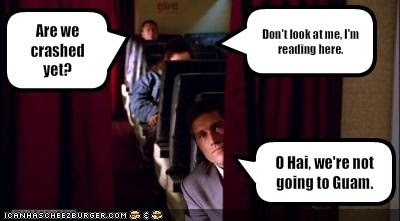 Next up - it's Flight 815 316 and off to the island! We discover that not only are Sun and Kate on board, but so are Hurley and Sayid! Oh yeah, and Locke. With Jack's dead father's shoes on. The gangs all here! 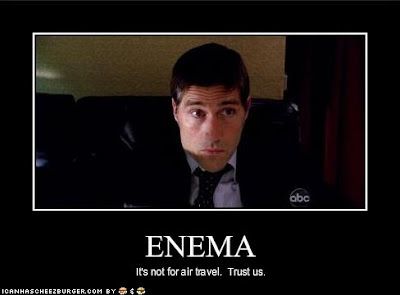 Jack has a hard time keeping the smile off of his face, but everyone else seems pretty bummed. Ben makes a last minute appearance looking a little worse for wear. This guy is determined to get back to the island no matter what! 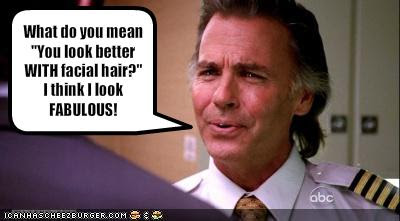 Also on board are two strangers that the show went out of their way to point out to us: the guy who offered Jack condolences for his friend and the marshal that is escorting Sayid. I have a feeling they'll pop up again... Not unlike our pilot buddy Frank! Hey Frank, grow back the beard. It makes you look more distinguished. 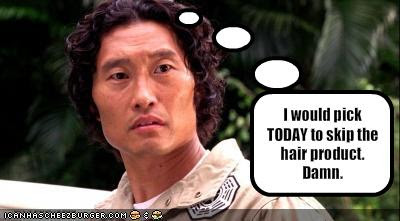 We wrap up back on the island with Jack, Kate and Hurley discussing a search through the jungle for their fellow castaways when who should appear? Jin! Jin with some crazy looking hair! What's going on? Are they in the past? Are they in the future? More importantly - where is Sawyer!!?!?!!?!? Guess we'll have to wait and see!
Posted by calicobebop at 10:59 AM

it was AWESOME...each week feels more and more exciting...love it.

Just can't watch it. I'm quite the weirdo, I know.