Hope you all had a fun Fourth of July! Muffin and I went to the park and pool on Saturday but yesterday it rained all day so we had to stay in. Talk about a quick way to make Mommy and Daughter insane! But I'm getting ahead of myself...
Last week was kind of crazy - I had a lot of loose ends to tie up Navy-wise so every morning Muffin and I commuted from Suffolk to Norfolk. Not a fun drive, but since we left a little after rush-hour every day it wasn't too terrible. By Thursday everything was pretty much done and I was ready to let my hair down. Unfortunately, Thursday morning I woke up with a bad cold. Seems like this bug was just waiting until I let my guard down to do a number on me. Grrr...
I took Dayquil and tried to fend it off as best I could but I know I wasn't a lot of fun to be around. Poor Muffin. At least she still had new movies and toys to play with so she wasn't too terribly bored. Saturday morning I felt a little more human and decided that we would do something fun. So - off to the local park!
Suffolk has a wonderful community park called KidZone that is HUGE! We spent over an hour there and my lovely child got to run some of that energy off. We only left because a little boy that she had been playing with hit her and well, that was that. His dad brought him over to apologize but by that time Muffin was in "the zone" and not feeling like having fun anymore. We left, had lunch and a nap.
After the nap I put her in her swim suit and we headed up to the YMCA. They were only open until 5:30 but that was plenty of time for us. Muffin played in the baby pool and had a great time. That evening I grilled some cheezy-brats for a traditional 4th of July dinner. :) Then, she slept like a rock! Awesome! 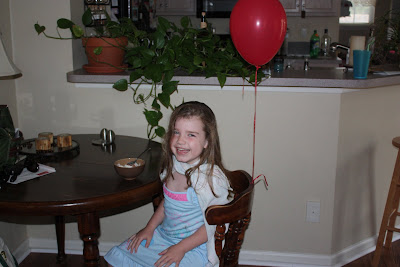 Yesterday it rained all day so we had some enforced togetherness. Thankfully, my friend has a few children's movies that Muffin hasn't seen and that helped to keep her occupied. I spent most of the day going through my pictures from Rome. I know, it's been two months - but I've been busy! And there were almost 1000 pictures!! Kind of daunting. But, now it's done so I'm proud.
Speaking of proud... One of my best friends had her baby on Saturday night! Her husband twittered the whole experience! It was really cool to receive updates on her condition and to learn when the new baby arrived. She was born after 9pm during the fireworks event. They're already calling her their little firecracker. How cute!
Today we got up bright and early for Muffin's swim lessons. She was so excited to go - but when it came to crunch time she Freaked. Out. The poor instructor was having to literally drag her into the pool. She screamed. She cried. She made a complete spectacle of herself. I have no idea where this sudden fear sprang from. One day she is fine - the next she is terrified of sinking.
No matter, we will work through this. I'm taking her to the pool this afternoon to get her more acclimated with deep water. I will keep giving her some private lessons in the hopes that her fear will dissipate. We come from a long line of swimmers and I'm certain that Ms. Muffin will learn to enjoy herself sooner or later.
That's us in a nutshell! I'm looking forward to more lazy summer days (minus the lawn-mowing) and hope everyone else is relaxing as well. I'm having a hard time using my google-reader so if I fall behind - I apologize. I'm always posting on twitter - hope to see you there!
Posted by calicobebop at 1:37 PM

Hooray for a relaxing weekend! You certainly earned it!

even with the rain, your weekend sounded very fun and relaxing...so jealous! :D

Hope Muffin starts feeling more confident at swim lessons...maybe it was just the new surroundings and you not being there? Who knows...Gavin has been to the dentist for a cleaning three times in his life. When did he freak out and scream and cry? At the most recent visit...his third visit. And he couldn't tell me why.

You commuted from Suffolk to Norfolk? You didn't tell me you were in England!

The girl went completely loopy when she first started going in the pool on her own (about 4 months ago) - she'd been swimming in that same pool since she was 6 months old. She's calmed down a bit now but still tells me proudly every week that she won't be swimming, she'll be walking across the pool. We'll get there and so will you.

Love "enforced togetherness." We've had a lot of that this summer!!

Sounds like a relaxing start to the summer, minus the cold and the commute. Have I mentioned that I love your new banner pic? Probably, but it bears repeating: I love it. :)

What a beautiful little girl!

Good luck on your transition from the military world to civilian--I hope you are able to enjoy some well earned time off this summer before getting back to the grind (minus the lawn mowing, of course).