So, I realize that my descriptions of our trip to Rome have been somewhat lackluster to date and I would hate to give the impression that we didn't have a good time! Therefore, in the spirit of full disclosure I'm going to relate the man whore experience:
It was our last night in Rome. Deb and I, having finally cleaned ourselves and dressed in cute clothes, decided to have a true Roman Dinner. With lots of wine. Lots and lots and lots of wine. We went to a lovely restaurant at the top of the Spanish Steps and enjoyed two full courses as well as two bottles of wine. It was SO fantastic.
Afterwards, we decided to try and find our way to Trevi Fountain without the aid of a map. Though I kinda-sorta knew the general direction we needed to be heading I was by no means sure of the exact location. And we were pretty drunk to boot.
So, after a few fumbling attempts at asking directions, I convinced Deb to stop at a deserted bar for a glass of vino bianco and some schmoozing. I ended up drinking both of our glasses and learned that Trevi Fountain was somewhere close by. We stumbled on and (after many wrong turns) found ourselves at the famed fountain. Apparently we had turned up when the street sweepers were doing their job so while we thought we were totally alone - we actually weren't. There was a bunch of people waiting for the street sweepers to do their thing but we blithely ignored them and dipped our feet in the fountain. Then we scampered. 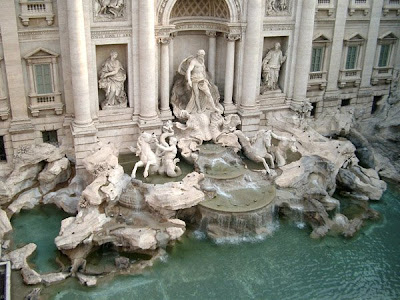 Finding our way to the fountain is one thing. Finding our way back to the hotel? A tad more challenging. We ran into a very friendly young man who immediately attached himself to Deb and started telling us about his Myspace page and all the lovely American ladies he has pictures of on it. Alarm bells started to go off in my drunken mind. Myspace + pictures = something bad.
I tried to dodge the little guy by ducking us into the nearest bar but, thanks to our bad luck, they were closing. On the way out we found him waiting for us. Smiling. **shudder** We explained that we were going back to our hotel at the Spanish Steps and he offered to show us how to get back as he hugged and groped us along the way.
Deb was very good natured about it. She explained that her boyfriend would not care for his "friendly" treatment and I stepped up and said that MY fictional boyfriend was a wrestler and would take. him. down. He was cheerfully unimpressed. I think he was convinced that he could con us into either taking him back to the hotel or at least shacking up with him somewhere else. Ah, the Italian confidence.
Even though hostility was virtually dripping off of me, he continued to drape himself over us and blabber on about his "Young American Lady Friends" on his Myspace page and actually took a picture of us with his cell phone. Finally we made it back to the hotel and our little friend asked if he could come up with us. We naturally turned him down flat but he persisted. At that point Deb and I basically had to flee within the hotel and hope that the porter would take care of the rubbish.
I vocalized my concern once inside the hotel - "I THINK THAT A MAN WHORE IS TRYING TO FOLLOW US!!!" Then, Deb and I shared a drunken giggle and retired to our room where we attemped to pack and finish up a bottle of wine before going to bed. Deb said to me, "I wouldn't be surprised if that dude was curled up outside the hotel waiting for us in the morning." He was so persistant.
The next day Deb was hung over and I was still drunk. Neither of us saw the little man whore lying in wait for us but that's not to say he wasn't there. We both enjoyed a good laugh and I made up a little ditty called "Man Whore" that pretty much put the icing on the cake. Well, my cake anyway.
I admit that I would have been very receptive to an Italian Romeo but confess that the little dude that wanted to put me on his Myspace page wasn't exactly what I had in mind. Still, who knows! He could have been a lot of fun. Maybe a little disease-ridden, but fun. Perhaps next time I'll keep an open mind. Or maybe I'll invest in a can of mace. :)
Posted by calicobebop at 9:00 AM

You sooo dodged a bullet. Although, I'm sure many people bring back a bottle or wine and chlamydia from Italy.

Sounds like you had quite the adventures and survived! How fun to go to Italy!

Well, he certainly was... friendly. I'm glad you were able to ditch him! Sounds skeevy.

What a great last night, though! Imagine if creepy Man Whore wasn't there. (Should I be picturing Rob Schneider?) you might have ended up with just a drunk last night in Rome.

Lol, that is the first time I have heard of someone hitting on someone using the good old myspace page, lol.

So, has he friend requested you on myspace yet? :)