I mentioned in my previous post that there was a problem concerning our luggage. More specifically - it was "lost" on Thursday and not returned to us until almost 10pm on Saturday. Do you know what that means? That means that dumb ole me had no clothes, no hairbrush, no anything-remotely-useful except my camera and a couple of guide books. For three days.

Here's what happened - and if you aren't interested in a timeline of events that culminates with me crying in the shower then I suggest you come back tomorrow. Fair warning! :)

OK! Thursday, my friend and I were set to fly out at 1:20pm to make a connection at JFK and arrive in Roma at 8:30am Friday morning. We boarded our plane from RDU on time and once we are all snug when the Captain comes on over the speakers to tell us that there is a "ground lock" at JFK and that he would have an update for us at 2pm. Then they unload us all and we are left to wait. Deb and I thought that we would still be in good shape to meet our connecting flight at JFK so we weren't too concerned.

At 2pm the Captain announces that we are still "ground locked" and he would have another update for us at 3pm. Deb and I exchange a look and decide to head for the counter to see what could be done. After standing in line for nearly an HOUR we get to the counter at the same time the Captain is coming back from the plane with another "update." No news - have to wait until 4pm for another update and oh-by-the-way the reason for the "ground lock" is thunderstorms. Great. Thanks, Mother Nature! Thanks for that! Yeah...

The lady at the ticket counter said she could re-route us through Cincinnati and Paris which would put us in Rome at 1:30pm. Ok, half a day lost - but at least we'll get there! Now, this is at 3pm. Our new flight leaves at 5:30pm. One would think that 2 1/2 hours would be plenty of time to move our luggage from one plane to another HOWEVER the incompetent lady at the counter kept mixing our baggage labels and descriptions up.

(Granted, we both had what is described as "black rollers" aka the 22" Black suitcase with rolly wheels that apparently every other traveler posesses. But STILL!)

Deb and I were repeatedly correcting her mistakes and she told us "Oh ladies (insert hand wave) they'll figure it out." And yet, they didn't. When we arrived in Rome there was no luggage. After waiting in another long-ass line the people at the lost luggage counter said that our luggage had flown to JFK. Fancy that. They told us we could expect it to arrive in Rome at 7:20am on Saturday.

Determined not to lose our cool (actually I'm pretty sure Deb wouldn't have lost her cool though she did mention a deep and abiding hatred of standing in lines after our experience) we were driven to our hotel and described our plight to the check-in lady. She assured us that everything would be taken care of. HA HA - we believed her, too! Silly us.

(Secretly I was certain that I was at fault for this disaster. Deb can tell you - I was absolutely OBSESSED about our luggage as soon as it was discovered that we would not make our original flight. I just KNEW something shitty was gonna happen. Though she did try and soothe me with sweet, sweet alcohol - it was to no avail. My worst nightmares came to pass.)

Now it was after 4pm. We were eight hours late with no luggage- so! - we went shopping. Deb had brought a dress and spare shirt in her carry-on but I had nothing. Neither of us had underpants or nightwear. The area around the Spanish Steps is known for high-end clothing and we were somewhat unwilling to "invest" in 30 euro panties or 60 euro nighties. Sadly, there was not a Target or Walmart to be found. Long story short (ish) we wound up at a department store that was still overpriced but hey - we got 3 euro undies and 17 euro nightgowns so we didn't feel as though we were too put out.

After that - it was time for wine. Oh boy, was it time for wine. The next day we awoke early for our tour of the Vatican and we both expected to find our luggage waiting for us when we returned. Nope! It was after 1pm and concierge said that the airline called and told him our luggage would be delivered "sometime that afternoon."

Alright, here is what was going through my mind: I firmly believed that meant our luggage would be delivered before 5pm. Because after 5pm it becomes "evening" and "evening" is different than "afternoon." In my book. But, since my book is in Americanese it is irrelevant.

So, we had lunch and some wine. Toured some churches. Took some pictures. Came back after 4pm and still no luggage. grr.

Freshened up, had dinner and some wine. Came back after 8pm and guess what? No luggage. double grr.

I was put out. I asked the concierge for a phone number so that I can make a call and find out what the fuck was going on. He told me that I should feel lucky because most people don't get their luggage for four or five days! I said "NO. I don't feel lucky." Not one tiny little bit. I stank, my clothes stank and my hair looked like I had used my own damn head to mop up engine oil for crying out loud! I want to look back at these pictures and see myself in cute little outfits! With cute hair! Dammit!!!!!

(For the record - it was at this point that I discovered how selfish and unreasonable I can be. Stupid American Tourist, indeed)

I think I must have looked as though I were about to create a scene because the concierge immediately offered to call the airline and check on the courier. I went back to my room and entered as he was calling to tell us that the luggage was picked up at 3pm and would be delivered in the next 12 or so hours. 12 OR SO HOURS?!?! I told the gentleman that this was seriously impeding my Rome experience and hung up. I couldn't think of anything cooler to say. I'm lame.

I tried to hold it together - I really did, but when I get mad and frustrated the tears just happen. So, I got in the shower and cried. Cried and cried and cried. Then, I used a hair clip to comb my hair out and put on a fluffy white robe. Ah, the first time I had felt clean in days. Deb and I were trying to decide what to do (I was leaning towards getting really really drunk) when the phone rang. It was going on 10pm and our luggage had arrived. The concierge delivered it himself because he "wanted to see the look on my face." Jackass.

And that is the tale of our luggage. We got all spiffed up, went to a wine bar and had a nice evening. The next day we toured Old Rome and the Pantheon. Loads of fun and shopping. Oh yeah, and sunburns. The Saturday trip to the Vatican was awesome too - my looking like an old french whore (SNL reference? anyone?) didn't diminish our fun at all. Deb sailed through the ordeal with flying colors and asked me the all important question "Now what did we learn from this experience?"

I'll tell you: We learned to pack an entire freaking outfit + underpants + nightwear in your carry-on as well as whatever grooming accessories you can get away with. That's what we learned. And I pass that valuable lesson on to all of you.

For the record - if I had had any inkling as to the long, fucked up delivery methods of Italian couriers I would have paid a taxi to go and fetch my luggage myself. Also, if the concierge was doing his job I believe I would have received my luggage earlier. I'm not trying to be a snob - I'm just saying that "service" means different things in different countries.

Oh yeah - and here I am at the Pantheon. In a fresh shirt. Looking kind of pregnant. Or maybe that's just my Italian food baby. Ah, the magic of clean laundry... 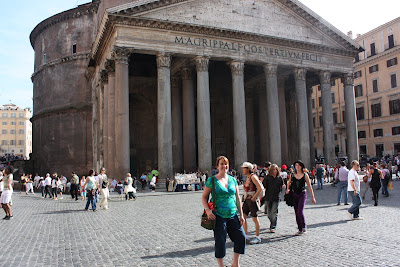 Posted by calicobebop at 8:19 AM

Wow. I am never leaving home without a clean pair of underwear in my bag again. I mean, to go anywhere, even the grocery store.

I'm so sorry for all the crap you went through. And so sorry that I was laughing almost the entire time I was reading this.

you do not look pregnant!

what a pain in the ass...usually I do pack one pair of panties and a bathing suit (if I'm going somewhere tropical) in my carry on...but will always remember to pack some grooming items as well next time!

I am now going to keep emergency panties in my purse at all times.

I'm glad that your luggage did finally arrive though. I had a trip once where they lost our luggage, which had clothes for a wedding and formula for Gavin. We didn't get them until we were leaving to go back home. And when I hollared about them leaving us to look like effing hillbillies at my college roommate's elegant wedding adn that I was tired of wearing the same underwear and that I was forced to buy more expensive formula and bibs and bottles, they lamely gave us two free flights--as long as we booked through a ticket counter agent. Jerks.
So I'm glad you at least got your clothes (even if you were a little scummy for a while and stuck washing your hair w/hotel shampoo). And I'm hella jealous of your trip!!!! Can't wait to see more pics!

Good day !.
You may , perhaps curious to know how one can make real money .
There is no initial capital needed You may start earning with as small sum of money as 20-100 dollars.

AimTrust is what you need
The company incorporates an offshore structure with advanced asset management technologies in production and delivery of pipes for oil and gas.

It is based in Panama with affiliates everywhere: In USA, Canada, Cyprus.
Do you want to become really rich in short time?
That`s your choice That`s what you desire!

I feel good, I started to get real money with the help of this company,
and I invite you to do the same. If it gets down to select a proper companion utilizes your money in a right way - that`s AimTrust!.
I make 2G daily, and what I started with was a funny sum of 500 bucks!
It`s easy to start , just click this link http://efiwiwaku.kogaryu.com/iqijes.html
and lucky you`re! Let`s take our chance together to become rich