A Tale of Two Flashlights

As I have mentioned before, summer in Eastern VA often brings tons of thunderstorms. Ever since the "lightening" episode, my Muffin gets a little freaked out at the sound of thunder. She has also developed a phobia of power-outages.

For the past several weeks she will break down about five nights out of seven due to her anxiety of thunderstorms and subsequent power outages. I explain to her that I will come and get her should any power outage arise from a severe thunderstorm - but that's not comforting enough. Finally, I remembered the super-cool flashlight that I Santa put in her stocking last Christmas! It's pink, it has the Disney Princesses on it and the jewels around the bulb light up!

I fished out the flashlight and brought it to her, explaining that IF the power goes off she should turn it on. She eyed it skeptically and asked if I would use MY flashlight if the power went out.

"Yes," I said "I will use my flashlight to come and get you."

"Well," she replied "I think that I should have YOUR flashlight. You can keep this Princess one."

"Allllrriiiiiggghhht," I said as I went to get my flashlight. Really? What's the appeal of a grown-up's flashlight? It's just a basic flashlight, nothing interesting about it at all!

Below is a comparison of the two flashlights. One has princesses, jewels that light up and bling on the end of the strap. The other has a black strap. Nothing else. 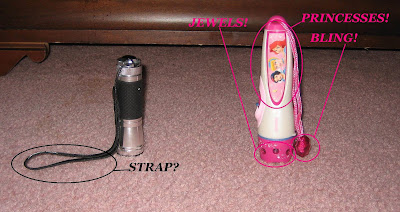 However, once she had my simple little flashlight tucked under her pillow she was able to relax enough to get some rest. Therefore, I am thankful for my generic flashlight. PLUS! I get to keep the super-cool Princess one for myself! SCORE!
Posted by calicobebop at 2:51 PM

Here are some tips on how to safely restore power due to unexpected power outages and safely use emergency generators.

How to Choose the Right Emergency Electric Generator
http://www.mainpowerconnect.com/static3/howto.asp

How to Safely Operate a Portable Generator and Transfer Switch
http://www.mainpowerconnect.com/static3/index.asp

THOSE DO NOT LOOK LIKE FLASHLIGHTS...seriously..I find myself wishing the power would go out and *I* had the princess looking one. ;)

On a serious note, last time our power went out we did a whole puppet show on the wall with the flashlights...now my kids ASK for power outage so we can do that again. lol