Some of you may remember a post I did called "What The Hell Happened To Hal Sparks" way back in 2008. It happens to be my most read post - and I'm pretty sure it has everything to do with the fact that a celebrity's name is in the title. I have also received the widest variety of comments from that single post - spanning nearly 18 months! Wow, make a comment about someone's personal style and everyone has something to say...

Then, I saw this on Lamebook yesterday. My long time VH1 "I Love The 80's" commentator received a scathing personal review from a formerly starry eyed fan. 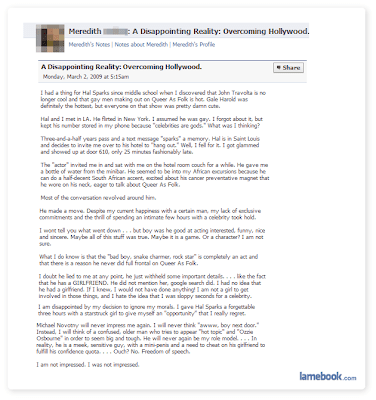 I'm not sure this chick deserves my sympathy. After all, she freely admitted that she spent the night with him because he was a celebrity. His cheating on a girlfriend is really not her business. Making a public announcement about his alleged lack of mad bed skillz just sounds like sour grapes to me.

So, I choose to believe that she's just bitter about not getting a morning after phone call. That way, I can still keep Hal on his pedestal. Because it's all about me. Me, me, me!
Posted by calicobebop at 9:01 AM

Yeah, I'm sure there are about a zillion girls out there with similar stories about celebs. I think any time you hook up with someone for reasons other than mutual attraction, there's a danger of someone getting their feelings hurt.

I'd never heard of Hal Sparks before I saw that on Lamebook.

Hahahahahahaha! Someone never got a call back!
I'm guessing "unimpressed" was a mutual conclusion.

Hey - I miss you! Come back and blog.

I love this blog. Check out mine, it a contant work in progress: