Wrapping Up The Drama

So, we were never exactly told the reasons behind Mr. X's arrest but I'm guessing it has something to do with the fraud allegations that were uncovered thanks to the modern miracle that is Google. Bless you Google for making it possible to spy on boyfriends/girlfriends/ex's/etc coworkers. You make the world a little less private and a whole lot more embarrassing. Oh, and according to you I'm a doctor as well as a budding rock star and make tiny clay figurines from home. Yay for me.
Right, the arrest happened on Monday, on Thursday there was a "one-liner" from our HR person saying that "Mr. X is no longer employed at Calicobebop's Workplace." Oops, my bad - it was a two liner - the second line read "He is no longer allowed on the premises or in the parking garage." Wha-damn! Oh yeah, and they hired a security guard who now sits on his ass in the lobby protects us from vengeful ex-employees hell bent on fulfilling their dream of going postal on all the people who wronged them.
You can always tell by the announcement if someone has left in disgrace or with the blessing of upper management. If you've screwed up and gotten fired or just quit - you get the little one liner. "So-and-so is no longer an employee." If you've retired after busting your buns for 20 odd years, you get the three paragraph glowing report of the many ways you contributed to the organization and how you will be missed and that we all wish you luck on future endeavors, blah, blah, blah...
OK, so Mr. X is "fired" on Thursday. On Friday the HR person sent out a job announcement for his position. This company works fast, lemme tell you! Not sure what we're supposed to do in the meantime but I think it's along the lines of "man up and deal" because that's the vibe I'm picking up and I'm usually not very intuitive.
There it is, the story that I will probably tell a thousand times so stop me if you've heard it before.
Also, I just want to thank all of you that have offered me a seat on your ride to Hell. I vote we all car pool together and get tricked out van complete with mini bar. What do you think? After all, vans are the personality vehicles! Let's ride! 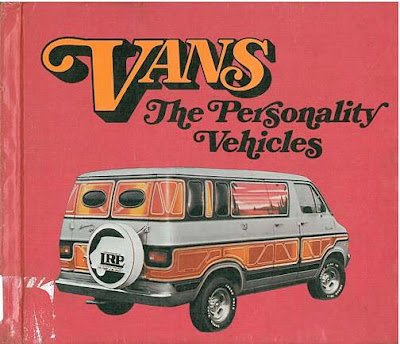 A tricked out van sounds good to me. Preferably one with cushy captain's chairs and plush orange or green shag carpet.

"green shag carpet' has a certain appeal - especially when you consider how the British use the word 'shag'.

I always wanted a kewl van like that when I was a child.

My inner child STILL wants one of those vans. Shag carpet and crushed velour could still make a comeback.

Count me in for the van ride - sounds good. I'm particularly looking forward to the shag carpet - although we call them shag pile carpets to avoid confusion!