Wow, when you have to work five days a week the weekend seems WAY too short! Just saying…
This weekend was pretty busy. Muffin and I drove three hours back to Hampton Roads in order to get my hair done. I love my hairdresser and thought “Hey, three hours isn’t THAT bad” but I was wrong. Because, it’s not just three hours. It’s three hours to GET THERE, another two hours for hair dressing and then three hours to get back home. And frankly, that’s insane. I was insane for even thinking it. Needless to say, I told Brenda (my lovely hairdresser) that I probably wouldn’t be making the trip again. She agreed and said she thought it was a little “crazy” to drive so much for a cut and color. Yes, yes it is.

So that pretty much ate up all of Saturday. At least my hair looks awesome. On Sunday Muffin and I laid around the house until about lunch time. Then we went to Target (does anyone else pronounce that store Tar-jay? Kind of with a French accent? Just me? Oh well) because Muffin needed a plastic pumpkin in order to trick or treat at BOO at the Zoo. I tried to tempt her with an environmentally sound eco-bag – but she wasn’t having it. Plastic pumpkin or nothing in her book.

After Target we went to DSW because home girl needed some boots. I have to say, not wearing the uniform anymore is both a blessing and a curse. On the one hand, I’m not restricted to an ugly outfit the color of cat sick. On the other hand, I have to buy all new stuff to wear. Still, it has really forced me to spend some time and money updating my woefully unfashionable wardrobe so I guess it’s a win/win all around. I bought three pairs of boots. They are awesome. I’m going to wear the crap out of them this season.

Finally, it was time to get home and get ready for BOO at the Zoo – which started at 5:30PM. I got Muffin in her costume and managed to get us out the door a little after 5PM. She looked adorable and I guess I was distracted by her loveliness because I plum forgot the tickets. We had to turn around and by the time we were back on the road it was nearly 5:30. We rushed into the Metro station where I was accosted by a man trying to get home. He asked for a dollar and I gave it to him. I’m a sucker for a sob story. Anyway, we hurried to the platform only to discover that the train wasn’t leaving for another ten minutes! Crap.

Once on the train, the Metro ride was pretty uneventful. Muffin attracted some attention – after all, she was the only princess on the train. We had to switch trains and that ate up some more time. Then we had to walk three blocks to the Zoo entrance. By the time we finally got there it was 7PM. And dark. So, we didn’t see any animals but Muffin scored a bunch of candy. Next year, I’m going to budget some “metro” time into the planning phase because I had no idea it would take as long as it did.

In unrelated news, I want to give a special shout out to Safeway. Yesterday after work I stopped by the store for some wine and stuff and when I was trying to tote said wine up to the third floor apartment I am staying in, the bag broke. Probably due to the bottle of Sprite that was sharing the flimsy bag. I am not even kidding when I say that some really colorful language followed this disaster. My wine was now a puddle and I was pissed. Here are some pictures I took with my phone for “evidence.” 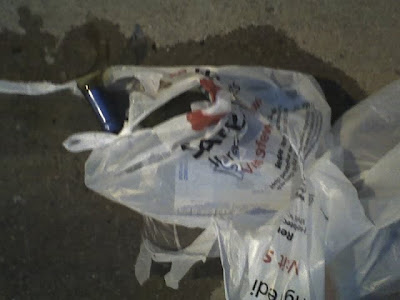 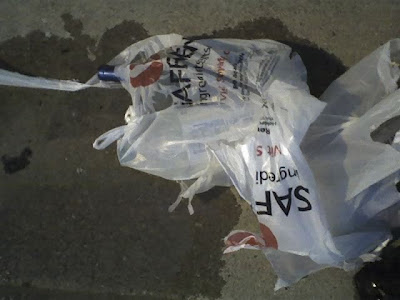 I put the rest of the groceries away, packaged up my broken wine and drove right back to the store. The whole time Muffin and I were in the car I was having a mental argument with the store manager. I just KNEW they were not going to replace the wine and I was ready for a fight. Never happened. The lady at the customer service desk could not have been nicer. She took the offending shards away, told me to get another bottle and TRIPLE bagged it! Thanks Customer Service Lady! I hope the universe does her a good turn.
Ok, well - that's it. Hope everyone has some spook-tacular plans for Halloween! Can't wait to read about them!
Posted by calicobebop at 11:19 AM

More even than sweaters, I love winter most of all for girls in boots. They should go swell with your freshly coiffed 'do.

And add my cosmic cheers to the customer service lady. Ain't it terrible that we must be surprised to be done a good turn, but then again, thank goodness there are still many that provide the surprises.

Visualizing Muffin holding court on the Metro makes me smile. I'm sure she was pleased with her candy haul, after all, the animals are there all year long, free candy is much harder to come by.

I call it Tar-jhay as well!

And you should be from the south... you said "plum forgot". That's totally something we say down here!

I have followed my hairdresser to no fewer than 3 different salons in the past 5 years, and I currently drive an hour to get to her. So, I get it! You find a good one, you hold on with a death grip, I say! :) I'm sure your coiffure is fantastic... pics, please!

LOVE Fall boots. Just got a new pair myself and have been inventing new reasons to wear 'em.

i feel your pain over the imaginary argument you had...but am so glad they replaced it!!! Yay for you!
And yay for new boots and yay for Boo at the Zoo...but Boo for the long metro ride.
That's all my cheering for the day :)

My heart broke when I saw that picture, but hearing that it was replaced has stopped the tears.

Man, Muffin must have been bored out of her gourd on Saturday! Glad she had fun on Sunday, she certainly earned it.

*I'm so glad I reread this. I totally typed "Muffing". Not cool.

I'm not alone!! Hooray for Tar-Jay!

may i suggest a more ecofriendly bag next time to carry your wine home? lol.

Please post some pictures of Muffin as a princess; you know Roo was a princess again this year. My Nana said they don't grow out of this stage untill 8!!

I totally call it Tar-jay too; my husband hates it and roles his eyes everytime.